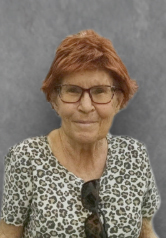 Roberta Jane Boomer Ekstein, age 74, was born November 20, 1945, in Superior, NE, the third of four children of Robert and Anne Boomer.  She died Monday, November 16, 2020, at home with both her daughters by her side.

Jane was baptized April 21, 1946, and grew to be a strong woman of faith, growing up in Superior with her family of three brothers. After the death of her father in 1953, the family relocated to Hastings, NE, where Jane graduated from Hastings High School in 1964. Jane was very involved in Girl Scouts through her school years.  After high school, Jane spent a brief time living in Lincoln, NE, working for the State of Nebraska in the Capital building for the Cartography Department.

Jane and Al were married in Hastings, NE, on July 24, 1966, and resided in the Hastings area once Al left the Marine Corps in 1967.  They also briefly lived in the San Diego, CA, area close to her brother Roger and his family in 1969, returning to Hastings until they relocated to Altoona, IA, in 1973 where they raised their family of four children.  They were charter members of Christ the King Lutheran Church in Altoona, IA. Jane worked in the insurance industry until retiring in the early 2000’s.  They returned to Nebraska in the summer of 2004, purchasing a home in Ashland, NE, a block away from her daughter Glenda.  This house was similar to the house of her childhood in Superior, and they spent almost a year living in their trailer RV while Al and their son-in-law John Wood completely renovated the house into a cozy home.  They remained in Ashland and became snowbirds, spending winters in the Corpus Christi area of Texas for several years until Al passed in 2015.  Jane then moved to Bellevue and spent most of the next five years at the Walnut Creek Senior Living Community where she had many friends and enjoyed monthly potlucks with her neighbors.  She remained active in her faith life, having been involved in four different congregations while living in Nebraska: American Lutheran Church, Ashland, Trinity Lutheran Church, Papillion, First Lutheran Church, Omaha, and Salvation Army Kroc Center, Omaha.

Jane was also an organ donor recipient. After suffering kidney failure in 1994 and going on the life saving treatment of dialysis, she received the gift of life through a kidney transplant in the spring of 1996.  The kidney supported her life until late 2014 when it started failing, and by the spring of 2015 she returned to dialysis treatments to sustain her life. She received wonderful care from the staff at Fresinius Dialysis Clinic in Omaha.  Her family was blessed by the gift another family made, allowing an entire generation, her grandchildren and three great-grandsons the opportunity to know her quiet but mighty presence.  An animal lover, having had many dogs and cats, she also loved gardening and quilting, spending many hours doing both as long her health allowed.