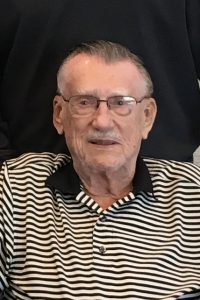 Bob passed away at Nebraska Medical Center Saturday June 6, 2020. Due to isolation he celebrated his 95th birthday with a drive-by parade on May 21, 2020. Bob was born in Laurens, IA to Frank and Mabel Kaufman.  On July 15, 1946 he married Marjorie Chapman.  In 1952, they moved from Iowa to Omaha where Bob worked as an electrician. He retired from OK Electric in 1982. He and Marge moved to Park Rapids, MN. Following her death in 2008 he moved back to Nebraska

Preceded in death by his wife Marge and son Bradley, parents & eight siblings.

In lieu of flowers, memorials suggested to your favorite charity.