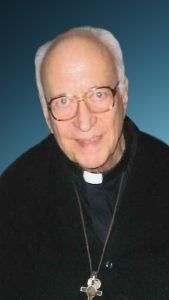 Fr. Alban Anthony Sueper was born on May 28, 1923, in Lindsay, NE. His parents were John Sueper (d. December 1959) and Mary Theresa Widhalm Sueper (d. November 1974). He was the youngest of four brothers and five sisters. One brother was killed in Leyte, Philippines, in November 1944 during World War II. Another brother, F.J. Sueper, became a religious brother with Oblates of Mary Immaculate. The family attended St. Bernard’s Parish in Lindsay.

Al attended St. Bernard’s Grade School, 1929‑1937, St. Bernard’s High School, 1937‑1939, Public High School, 1939‑1940, and St. Francis High School in Humphrey, NE, 1940‑1941. With his brother away in the Army, Al helped his aging father run the family farm during World War II. Al was interested in becoming a missionary priest and was accepted by the Columbans. He brushed up on his Latin during the summer months of 1946 at St. Columbans, NE, before starting Spiritual Year in Bristol, RI. He then went on to the major seminary in St. Columbans, NE. His ordination was on May 30, 1953, by Bishop Edward Galvin at St. Mary’s Church, Bellevue, NE.

Al spent the year after ordination in Louisiana studying tropical agriculture. He went to the Philippines in the fall of 1954. He studied the Cebuano language in Ozamis City, Mindanao. In 1955 he was assistant at Molave, Zamboanga del Sur, until 1958 when he became the first pastor of Domingag, a parish cut off from Molave, where he stayed till 1961. He later served at St. Isidore Parish, Dumalinao, Zamboanga del Sur.

In November 1971 he left the Philippines for assignment in the U.S. Region. There he began promotion work at the West Chester house. In May 1977 he was appointed Vicar and Bursar at the West Chester house. However a few months later found him as part of the Columban formation team at the College of St. Thomas in St. Paul, MN, where he served as bursar and also did promotion work. In June 79 he also began service as Vice Rector at St. Paul. In April 1980 he became pastor at Blessed Sacrament Parish in Westminster, CA.

In July 1986 he became the local superior of the Omaha House and also worked in the General Mission Office. In August 1992 he went to the Los Angeles house as Vicar and Bursar. In December 1994 he became Bursar at the Omaha house. In January 1998 he became Director of St. Columban’s Retreat House there. In December 2003 he celebrated his Golden Jubilee as a priest.

In May 2005 the Regional Council assigned Father Al to the Columban retirement house in Bristol, RI. While there he would visit nursing homes and entertain the patients, playing tunes on his electronic keyboard.

Father Alban died at 2:30 PM on May 5, 2020, at St. Elizabeth’s Manor in Bristol, RI. It was his wish that his funeral take place in Nebraska, and to be buried in his native place.

He is survived by many nieces, nephews and cousins.

Posted by St. Mary's Catholic Church of Bellevue, Nebraska on Monday, May 11, 2020