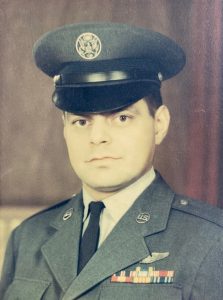 Paul A. Thompson, 80, of Winthrop, Iowa, passed away on Monday, September 6, 2021, at Prairie Hills Assisted Living in Independence, Iowa.

Funeral services will be held 10:00 a.m., Monday, September 13, 2021, with visitation one hour prior, both at Bellevue Memorial Chapel.  Burial will be at Westlawn Hillcrest Cemetery in  Omaha, Nebraska.   Military Honors will be conducted by the Offutt AFB Honor Guard and American Legion Post 331.

Paul Andrew Thompson was born on September 13, 1940, in Fort Dodge, Iowa, the son of Leonard and Alice (Dencklau) Thompson.  He graduated with the Dayton High School class of 1958.

Following his education, Paul enlisted in the United State Air Force.  He served his Country from May of 1959, until his honorable discharge in August of 1967.  Paul was employed by Fed Ex, delivering in Omaha.

He is also survived by three sisters, Karen Dorman, Diane Peeler, and Lori Raymond; and one brother, Keith (Susie) Thompson.

To view video of the service, please click the link below: