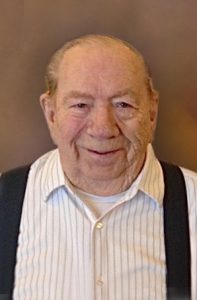 Leon Thomas “Spike” Godwin, age 84, of Bellevue, NE, went to be with our Lord on December 27, 2020, in Omaha, NE.  Spike was born on August 19, 1936, in Dunn, NC, to Betty Alice and Robert Lee Godwin.  Born 7th out of 11 kids, Spike and his siblings worked the family’s farm and picked tobacco and cotton.  At age 14, Spike’s dad passed away, increasing his responsibilities within the family.

In 1954, Spike enlisted in the United States Air Force where he worked as an Inflight Refueling Operator/Technician.  While stationed in Salina, KS, he met his bride, Elaine Cyr, in 1958.  They were married on October 22, 1960, and welcomed 2 children while living in Salina.  A move to Merced, CA, would bless them with 3 more children.  In May 1969, the family of 7 packed up the station wagon for Offutt Air Force Base where Bellevue, NE, became their forever home.  Spike retired from the United States Air Force with the rank of Master Sergeant in June 1975.

Spike’s next adventure was with the United States Postal Service where he served as president of the Mail Handlers Union Local 298 from 1980-1996.  This role allowed Spike to travel the country, and sometimes his grandkids would join.  Spike retired from the USPS in 2002.

Over the years, Spike attended more baseball games, wrestling matches, and dance recitals than he could count.  Whether he was coaching his kids’ sports teams or watching his grandkids’ activities, he never missed the opportunity to be involved.  The epitome of a family man, Spike enjoyed entertaining his family.

Spike was an outstanding cook and always infused family recipes from his Southern roots and traditions.  It was around the table where the best Godwin family memories were made, and the grandkids could always count on Papa Spike for a dixie cup of goodies.  Though his loss is tremendous, it gives the family great joy that Spike and Elaine are reunited again.

To view video of the Vigil Service, click the link below:

To view video of the Funeral Mass, click the link below: