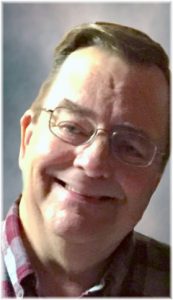 There is no feasible way that the essence of Moe could be captured in just a few short paragraphs. However, we only have so much space in which we can talk about what a phenomenal father, husband, grandfather, uncle, brother, son, and friend that he was. We will do our best to capture the things about him that he was the proudest of, and the rest is all held within our memories, stories, and photographs.

Lance “Moe” Mosiman was born in Beatrice, Nebraska to June and Wilbur Mosiman. He was blessed with two younger sisters, Gina, and Michele. He got his first job at the Phillips 66 filling station the day he turned 16 and worked there until he graduated from Beatrice High School in 1974. He had very fond memories of his job, earning himself the CB handle of “Fuel Pumper”, and would tell many stories about his time there. When he wasn’t working, he enjoyed playing with his band, Blastwagon.

He joined the Air Force in August of 1974 and received his first assignment at Wright Patterson Air Force Base in Ohio as a Communications Technician. He was then stationed at Incirlik AFB in Turkey in May 1979 and spent two years there before getting assigned to Offutt AFB, Nebraska in April 1981. He crossed trained into Airborne Communications in 1983 and spent the rest of his career based out of Offutt. His work on the E4-B took him to over 100 different countries, culminating in 15 years of hard work that he is still remembered for. It seemed that everyone knew of or had heard of Big Moe because of the passion he put into leading, teaching and his dedication to the “E4-B of Love”.

Moe started dating his wife Michelle in March of 2000 and got married on August 10th of 2001. They were two peas in a pod, and rarely spent a moment away from each other. They enjoyed traveling together, summers at the lake, and spent most of their 21 years of marriage laughing together. He truly had found his person and they were a perfect match from the start.

After retiring from the Air Force in August of 1998, he moved on to become a Program Manager at AT&T Government Solutions. He continued his work with the DoD based agencies that he loved and got to continue traveling within the United States. He was just as proud of his work behind the scenes at his desk as he was at the telecommunications equipment on the E4-B. He retired from AT&T Government Solutions in March of 2019. In true Moe fashion, he started volunteering through the American Red Cross at the 55th Medical Group at Offutt AFB. Even being retired, he still wanted to work with military members and within the military community.

Moe loved his family and loved to spend time with them having family dinners in which his culinary skills could shine. He always enjoyed going to the finest restaurants and insisted that food pictures were always sent when he went out to eat and expected the same in return. Cooking brought him a great deal of joy and he loved sharing his food with family and friends.

Moe loved spending time with his three children Kristina, Jennifer, and Aaron on the Big Deck, having family game nights, plenty of delicious food and lots of laughter. He had many grandchildren, and he took a tremendous amount of pride in being their Papa Moe. He leaves behind family, many great friends and colleagues who will forever feel this loss. Those who had the pleasure of knowing him know that the world will not be the same without his smile, sense of humor and larger than life presence.

Inurnment:  At a later date / Omaha National Cemetery with Honors by the Offutt Air Force Base Honor Guard at a later date