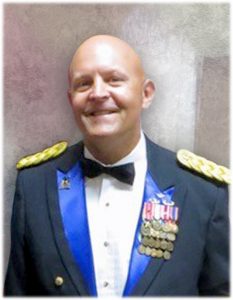 LTC Kenneth Maurice Wilkinson was born in Dugway Proving Ground, UT, to Maurice and Eunice (Rogers) Wilkinson. On May 13, 1989, Kenny was united in marriage to Tonya Anderson Wilkinson. He graduated from Clinton High School (Clinton, SC) in 1985, and Clemson University in 1989. Kenny served in the United States Army for 21 years. He was a UH-60 Blackhawk pilot and proudly served two tours in the 82nd Airborne Division. In retirement, Kenny worked as a National Park Law Enforcement Ranger, an EMT, and maintenance coordinator at Harvest Community Church in Omaha, NE, where he was also a member.

Kenny is survived by his wife of 30 years, Tonya of Bellevue, NE; parents Maurice and Eunice Wilkinson of Simpsonville, SC; children Cayce (Josh Graalfs) of Council Bluffs, IA and Jacob (Gini Phillips) of Roeland Park, KS; one grandchild on the way; siblings Stephen (Wendy) Wilkinson and Becky (Mike) Oliver, all of Simpsonville, SC; and several nieces and nephews.

A memorial service will be held at 2 p.m. at Harvest Community Church, 3903 Cuming St, Omaha, on Sunday, September 22, with Military Honors by the US Army National Guard Honor Guard and American Legion Post 331. A Reception of Friends will follow the service until 4:30 p.m. In lieu of flowers, memorials are suggested to the Harvest Community Church Capital Campaign.

Inurnment will be held at the Arlington National Cemetery at a later date.