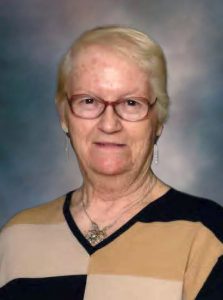 Kathleen Grace Costello was born the seventh child in the seventh month to Helena and Frank Costello.  She grew up on a 160 acre farm near Greeley, NE with her 13 brothers and sisters.  She attended St. Joseph’s School at O’Connor and graduated in 1946.  After  high school, she moved to Omaha and briefly attended Mercy College, eventually working sales for Orchard-Wilhelm.  Kathleen met Richard Conant in Omaha, and after four months of dating, were married at the Church of the Visitation at O’Connor on April 12, 1948.  They started their early married life living in Cedar Rapids and Fremont, NE, then left the state and headed for California.  In California, Kathleen worked an office job for the State of California and at the San Francisco Bay Bridge Office.  While in California, they lived in Oakland and Sacramento.  After 11 years of marriage, James Richard was born on February 9, 1959, followed by Eileen Ann on September 12, 1960.  They returned to Nebraska in 1962 living in Gretna and on August 14, 1967, Gerald Patrick was born.  In 1970, they moved to Valley Nebraska where they lived until 1986.  After the kids were grown and gone, they lived in Omaha until Richard retired, then started RVing, spending winters in Arizona and summers back in the Omaha area. After a few years, they purchased a mobile home living in Omaha; then on a property in Nehawka.  After living there a few years, they sold the place and went RVing again.  They spent time in Cocoa, Florida with son, Jim, and in Arizona and Nebraska.  After a few more years of traveling, they settled into over-55 communities, first in Plattsmouth, then Bellevue and finally ending up at the Eastern Nebraska Veterans Home.  Kathleen had a winning smile, an infectious laugh and the iron will of the Irish.  She was the ULTIMATE HUSKER FOOTBALL fan.  She loved taking photos, films, reading and painting.  Most of her artwork is cherished and hanging in the homes of her children and grandchildren.  She was also a devout Catholic.

You will be loved and missed on this earth, but we know the Lord, along with those who love you, are caring for you until we can join you in Heaven.  Your Loving Family

To view video of the Vigil Service, click the link below.

To view video of the Mass, click the link below.