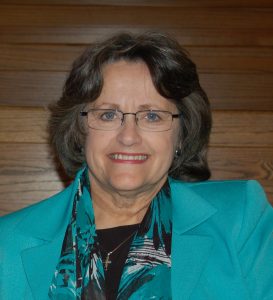 Judy Ann (Albrecht) Barelman was welcomed home by her Lord and Savior on October 13, 2020, in Papillion, Nebraska, after a long and courageous battle with colon cancer.  Judy was born March 16, 1943, in Emerson, Nebraska, to Walter and Violet (Gutzmann) Albrecht. She was baptized at St. Paul’s Lutheran Church on September 12, 1943.  She attended elementary school in a one room schoolhouse in Thurston County, Nebraska.  She was confirmed at St. Paul’s on April 14, 1957.  In August of 1952, Judy contracted polio. She was taken to an overcrowded St. Joseph Hospital in Sioux City, Iowa, for treatment and then went home to recover.  She spent the entire school year at home under the tutelage of her mother.  The polio damaged her spine, leaving it shaped like an “S”.   At Emerson High School she was active in vocal and instrumental music.  She graduated in 1961 and was awarded a scholarship to Midland Lutheran College for music.

At Midland she was a member of the Cleff Dwellers, a special vocal and dance troupe that traveled to US military bases in the Caribbean to perform for the USO.  She graduated with a degree in elementary education. On June 6, 1965, she married Herb Barelman.  The couple enjoyed over 55 years together.  They loved to travel and visited all 50 states, 16 Presidential Museums and over 17 foreign countries.

Judy taught school and was a homebound teacher. Her Christian faith was very important to her and she was involved in women’s and children’s ministries.  Judy was a member of the Bellevue Women’s Club and PEO.  She was a competitor and had a lifelong love of playing games, which she passed on to her children and grandchildren.  Judy treasured the friendships she made with her women’s bridge club and her couples bridge club.  She was an excellent cook and seamstress.  Judy always put her family first and cherished her role as a wife, mom and grandma.