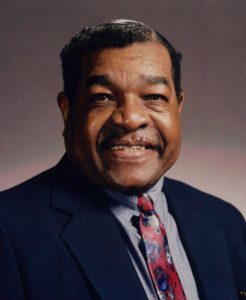 John Countee, Jr. ”Dilly” was born in College Place, SC, a small suburb of Columbia, SC. He was the fifth of five children born to John and Cornelia Countee.

John’s elementary education started in College Place, SC, but only for a short time. After his family migrated to Chester, PA, in September 1944, he continued his elementary schooling at Starr School. He attended Smedley Junior High, where he graduated in 1951. He then went on to Chester High School where he graduated in 1954. Upon graduating from high school, he elected to enlist in the United States Air Force rather than to attend Muhlenberg College, PA, with aspirations of becoming a doctor.

During his Air Force career, he became a dynamic leader in the non-commissioned officer ranks. He managed to continue his education throughout the 24 years he served in the Air Force, from July 1954 to November 1978. He retired from the Air Force as a Senior Master Sergeant.

After retiring from the USAF, John worked for the City of Shreveport, LA, as a Safety and Training Officer. After being on the job only six months, he was promoted to General Foreman for Contracting. He was responsible for the purchase and maintenance of all heavy and light equipment for the Sanitation, Traffic Engineering, Street and Roads Departments. John continued to serve as Supervisor of Safety and Training of all the personnel in those departments.

Following his employment with the City of Shreveport, LA, John became the Disaster Preparedness Officer at Offutt AFB, Omaha, NE, from August 1980 to April 1985. He left Offutt AFB in 1985 to work for the United States Army Corps of Engineers as an Emergency Manager with the Missouri River Division, Omaha, NE, from September 1985 to April 1995. John was selected as the North Pacific Division Chief of Emergency Management, Portland, OR, where he served from 1995 to 2002. John retired from Federal Civil Service on January 3, 2002. John’s distinguished career covered a period of 46.5 years of outstanding service to his country, and he is very well known for his expertise in Emergency Management throughout the United States and its territories.

John worked for the Federal Emergency Management Agency (FEMA) in Community Relations during many major disasters all over the United States. The Corps of Engineers implemented the Retired Annuitant Program for retirees approximately a year ago. John worked in that program for the Corps from April 2006 to November 2006.

He was very active in community affairs. He became a member of the prestigious Benedict Social and Civic Club of Omaha in April of 1983, where he served as Vice President, Secretary and as Chairman of the Entertainment Committee. John left Omaha in April 1995 for a new position in Portland, OR, but was later granted a leave of absence. He returned to Omaha in September 2001, and rejoined the club and served as Vice President. In retirement, John served as a Loan Executor for the United Way of the Midlands, and he was a Court Appointed Special Advocate (CASA) for Sarpy County.

John was preceded in death by his wife Janice; parents John and Cornelia Countee, Sr.