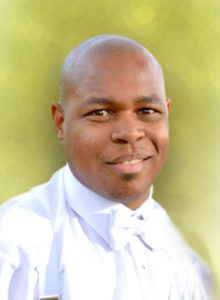 It is with great sadness that the family of Jermain Terrell Jarmon announces his passing at the age of 41 on Friday, November 23, 2018.

Jermain was born to Garland and Mary Jarmon on August 6, 1977.  He was the youngest of four children.  He was a native of Bellevue, NE, and completed his education through the Bellevue Public School (BPS) system.  With the support of his home bound teacher, family and BPS, Jermain was able to earn his high school diploma from Bellevue East High School in 1996.  He then continued his education at Metropolitan Community College.

Jermain was diagnosed with Sickle Cell Anemia at an early age.  The disorder did not define him; however, it did affect his life in many ways.  As a toddler he suffered a major stroke that partially paralyzed the left side of his body.  He would go through life walking with a limp, and without the ability to extend his left arm.  Visits to Children’s Hospital and CUCM Bergan Mercy for monthly blood transfusions, check-ups, and hospitalizations became his norm.  However, these experiences did not deter Jermain from living his life to the fullest.

Camp CoHoLo was a special place for Jermain.  He spent time there both as a camper and camp counselor.

Jermain and Heather were blessed with two children, whom they cherished.   He loved spending time with his family.  His favorite past times were annual summer vacations to Kansas City, “gaming” with his son, mentoring his nephew, and attending his children’s sporting and musical events.

Jermain accepted Jesus Christ as his Lord and Savior at an early age and was a devoted Christian.  He always thanked God for all the blessings bestowed upon him.  He was very active in his church as a member of the choir and a Kids’ Church teacher.  One of his favorite activities was assisting with the children’s annual Christmas program.  Jermain enjoyed being a role model for the kids and proving to them that they could achieve anything they worked for.

Jermain was an amazing son, brother, husband, father, uncle, cousin, and friend.  He will always be remembered for being the cornerstone of his family, and for his radiant smile.

He is preceded in death by his brother Deshaun, grandmother Lottie Brown and cousin Imani Edwards.

He will also be remembered with loving memories by his nephew, six nieces, nine aunts, six uncles, 32 cousins, and a host of friends.