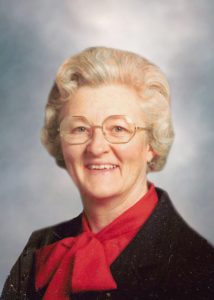 Jane Woodbury Seeling, age 94, of Bellevue, NE, passed away comfortably in her sleep on September 14, 2022.

Jane was born at home on January 13, 1928 in Milton Mills, New Hampshire and grew up on a poultry farm where her father was instrumental in developing the New Hampshire Red breed of chickens. After Jane graduated from Nute High School, she went on to study nursing at Massachusetts General Hospital.

After graduating as a Registered Nurse, she worked at Mass General then Duke University Hospital, NC where she met her future husband Fred who was serving in the 82nd Airborne Division at Fort Bragg.  They were married on May 7, 1955 and after several short residences, settled in Amherst, New Hampshire and later in Weare, New Hampshire where they raised their family.

Jane centered her life with discipline and diligence in the home where all of her energies and activities focused on supporting Fred in his business, raising her children, growing and preparing food for her family, sewing and knitting clothes for them, and skillfully managing all aspects of the home.

She learned the Bible at an early age having been taught its precepts in the home and in public school classes.  She accepted the Lord Jesus Christ as her Savior at an early age and reproduced that faith in her children.  She read the Bible through many times throughout her life as well as countless Christian biographies, study guides, and related materials.