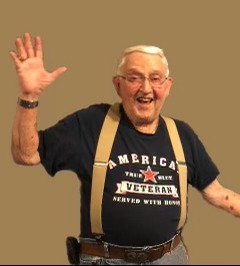 Eugene H. Anders, Sr. was born on September 6, 1939, to Hazel Virginia (Smith) Anders and Harold Judson Anders in Stronghurst, Illinois, and died on January 8, 2021, in Bellevue, Nebraska, with his family by his side.

Known by many as “Andy”, he was raised in Stronghurst with his sister June and his brother Phillip. He helped on the farm growing up and eventually became a farmhand in his young life. He graduated from Stronghurst High School in 1957.

After graduating high school, Eugene chose to serve his country and joined the U.S. Navy in October of 1957 and worked as an administrative specialist working in the mail room aboard ship until August of 1959. In March of 1961, after a minor break in service, Eugene decided to continue his military service by joining the U.S. Army where he worked as an administrative specialist performing duties such as applicant testing for military entrance, working with military personnel files, various administrative duties, and working in compassionate duty assignments and next-of-kin notifications. Then, in November 1979, Eugene honorably retired from the U.S. Army after 20 total years of military service.

Upon retiring from the Army in 1979, Eugene and his family lived in Illinois and Nebraska before finally settling with his wife, Cheris, in Dwight, Kansas. He worked various jobs including driving a taxi for Bell Taxi in Junction City, Kansas, worked in Dwight as a lawn mower mechanic, worked for the City of Dwight maintaining roads, and finally as a sand plant machinery operator for Konza Construction Company in Junction City, Kansas, for his longest tenured employment. He finally retired fully at the age of 65 in 2005. He and his wife eventually moved to Wamego, Kansas, and it was here that Cheris died in 2016. To help with Eugene’s health, he moved to Bellevue, Nebraska, to live with his son Dennis Anders and daughter-in-law Casey during the final years of his life.

Eugene was known to be a clever jokester and enjoyed fishing, working in his garage and in the yard, and loved playing pool, card games, and doing puzzles, building model houses and cars, and played in numerous bowling leagues. One of his fondest enjoyments was being with his friends and family. He was a proud member of the American Legion and the Veterans of Foreign Wars and was a member of the Dwight City Council. He was a very loving and devoted husband, father, and grandpa and will be missed dearly.

Celebration of Life will be held at a later date.