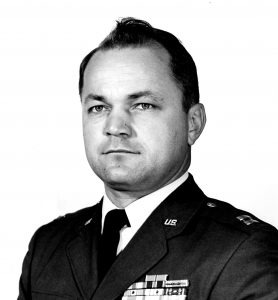 Donald A. Nikunen, son of Arne and Irene Nikunen, was born in Buhl, Minnesota, on June 29, 1934. After graduation from Martin Hughes High School in Buhl, Don joined the Air Force.  The Air Force sent Don to a Michigan Air Force Base where he met his bride Margaret, a member of the Royal Canadian Air Force.  The Air Force sent the couple and their family all over the world including Libya, Germany, England, Alaska, Montana, and eventually SAC Headquarters Offutt AFB and Bellevue, Nebraska. Don retired from the Air Force after a 28 year career which included serving in the Vietnam War. Don enjoyed a successful career at Radio Shack after the Air Force, when he wasn’t on fishing trips. Don’s final years were spent in the Heritage Ridge community in Bellevue.

Don was preceded in death by his parents and wife Margaret.   Those who remain to remember Don’s life are his sister Betty Ornberg of Virginia, Minnesota; daughter Kathy (John) Mueller of Bellevue, Nebraska; son Michael (Molly) of Seattle, Washington; son David (Christine) of Omaha; daughter Sheri Kennedy (Todd White) of Omaha; son Bob of Omaha; 9 grandchildren Johanna, Hannah, Jonathan, Grace, David, Izak, Nik, Maggie and Ana; and many friends. He was fortunate to have much of his medical care through Bellevue Medical Center where he made many friends.

Gifts in memory of Don Nikunen may be made to benefit Nebraska Medicine-Bellevue Medical Center. Please send donations to the University of Nebraska Foundation, P. O. Box 82555, Lincoln, NE 68501-2555. Please make checks payable to the NU Foundation and include on the memo line or enclosed note that the gift is in memory of Don Nikunen. Please visit nufoundation.org to make an online gift.