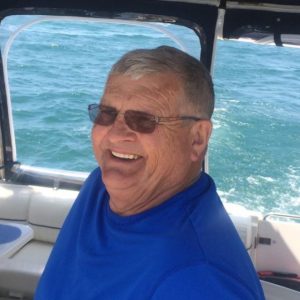 Danny was born and raised in Bellevue, Nebraska. As a child, Danny enjoyed spending time with the grandparents.  He also enjoyed hanging out at rivers, lakes and creeks with friends.

From a young age he was always hard-working. Danny worked at Wilson Concrete and numerous other jobs until he found his calling as an electrician.

Danny proudly served his country in the United States Army during the Vietnam War.  Upon his return he continued his courtship of Marilyn, and after their marriage they welcomed their two children.

Danny spent his spare time camping, fishing, boating, ATVing and enjoying the outdoors with his family and friends. Danny was very involved and present with his children’s sports and activities. Danny loved sharing his passion for cooking. His cooking was enjoyed by anyone in his presence and all were welcome to the table. This passion was passed down to his children.

More than anything he loved his wife Marilyn and his children Aron and Mandy.

We will all remember Danny for his compassion along with a healthy dose of sarcasm and playfulness.

Celebration of Life: Saturday, May 15, 11 a.m., with a reception of friends and family following CDC guidelines one hour prior, both at Bellevue Memorial Chapel.

In lieu of flowers, donations can be made to Moving Veterans Forward at nvfne.org.