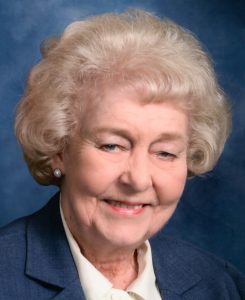 Betty was a graduate of Reagan High School, Houston, TX.  At age three she began her musical career with a church solo on Christmas 1934.  Over the next 80 plus years she has been a vocal soloist; founder, director, and member of various civic and church singing groups; and Girl Scout Leader.  In October 2013 she received the Jewel of Bellevue Award, the highest civic honor the city can confer. After her marriage in 1954 she accompanied her husband on a 22 year adventure with the US Air Force.

In lieu of flowers, memorials may be made to Midlands Chapter of the Alzheimer’s Association, First Presbyterian Church, Bellevue, NE or the Bellevue Senior Center.

Memorial Services will be held at a later date.