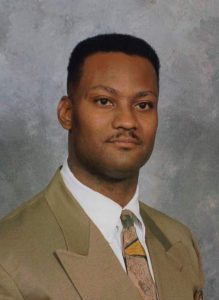 Anthony Lambert Holloway was born on April 21, 1964 in San Juan, Puerto Rico.  He died on November 4th following a short illness.  Anthony was the youngest child of U.S. Air Force man Wardell Holloway, Sr and Mary Francis Holloway. Soon after his birth, the couple moved their family to Offutt Air Force Base in Bellevue, NE, near Omaha, where he was raised in a Christian home.

“Tony” as he was lovingly called excelled in school and in sports. It was one particularly odd shaped ball that caught his attention and would keep it for the rest of his life. Tony began playing football with Pop Warner, continuing through Bellevue West High School and into college. One of his most cherished moments was when the top ranked NCAA, Division 1, University of Nebraska Cornhuskers came calling.  He played as #45 and #95 under the watchful eye of sports legend, Coach Tom Osborne and other Huskers greats.

As a starting defensive end, Tony’s aggressiveness helped lead the team to many victories and conference championships including the Sugar, Orange and Fiesta Bowls. Tony played with the Cleveland Browns and the Kansas City Chiefs, but a knee injury suffered during a play threw a dash in his NFL career.  Tony recounted that play occurred when a 300 pound lineman fell on his knee twisting it.

Determined to win, he went back to Lincoln, completed his degree  while still under scholarship.  He earned a Bachelor of Science degree in Computer Science with a minor in Physics. Later, he earned a Masters in Business Administration and a Masters in Project Management from Keller Graduate School of Management

Tony ran Positech computer consulting most of his life dividing time with his Fortune 500 employers including AIG/Sun America, GE Capital, and Harman International.  He often took work related phone calls and worked well into the night to brainstorm system problems.  It’s the same kind of work ethic that he taught to his online and classroom students at ITT Technical Institute.

We will also miss hearing about “the Butler” and how it will make us millions.  We will miss miss you trying to explain to Carol why the kids’ pet bunnies, Hippity and Hop, should be allowed to roam the house free as birds.

We will miss you renaming the families’ Tzu-poodle, Lov Vee to Mutley, while claiming you had the hold on all the dog world.  We will miss your playfulness with Lori allowing her to ride her “grown self” on your back like in childhood.  We’ll also miss your conversation with your dad and brothers about business and the world.  We’ll miss how you could make all the ladies laugh, but especially your “ma”.

We will miss your handstands on land and deep dive plunges in the pool.  So many other stories shared by Husker’s great David Bryan, #58, and childhood friend, Derek Barnes, about your escapades.  We’ll miss your own stories about Doug, Paul and the fellas.  We’ll miss how you opened your own home up to a former coworker turned best friends after life dealt a temporary blow.

Mostly, we’ll miss your charm, fantastic wit, and contagious smile.  A handsome, towering figure who could walk in the room and brighten up anybody’s day.  Standing 6 feet 3 inches tall, 190-210 pounds with the confidence and the ability to challenge us all.   Tony, you were our families’ dream maker; you still are.

Family footnote:  So many of Tony’s dearest friends are finding out late.  Our deepest apologies.  We looked for you.  Everything happened so fast.  We love you.