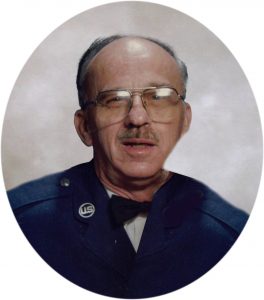 Eugene served 31 years in the Air Force and a total of 50 years as a military weatherman and civilian government service employee.  He had numerous articles published by the American Meteorological Society and the National Weather Digest.

A Korean and Vietnam veteran, Eugene was chief of Forecaster Studies, and Aerospace Sciences Division 3d Weather Wing at Offutt Air Force Base.  He was the chapter’s corresponding secretary of the American Meteorological Society.

His expertise in weather forecasting saved the military millions from storm damage.  Therefore, he conducted numerous seminars including five days at The Weather Channel in Atlanta, Georgia, and WOWT/Channel 6 in Omaha, Nebraska. Eugene had close ties with TV weatherman Jim Flowers.

Eugene received many awards including the Charles E. Mitchell Award in January of 2002, and the Merewether Air Weather Service Award in 1976, 1978, 1986.  A 60 year Kansas City fan, Eugene was a lifelong stamp collector, a 65+ year bowler including ABC and USBC leagues, and a bowling secretary.  He was also a lifelong member of the VFW.  In his later years he battled dementia and heart problems.

To view a live broadcast of the service, please click the link below: