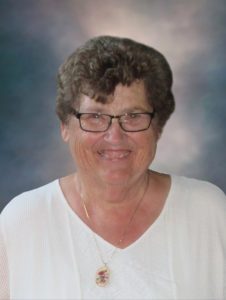 Penny Gail Carpenter was born in Joliet, Illinois, the only child of Chuck and Libby Kuester.  She married Ray Carpenter 53 years ago and moved around the country with him as a proud Air Force wife.  She loved playing golf, traveling with her family, meeting friends for coffee, playing card games, and cheering relentlessly for her beloved Tennessee Volunteers.  She was a teacher, a stay at home mother, an award-winning volunteer, an accountant , an insurance agent, and even a telemarketer.  Her pride and joy was her family.  She spent hours supporting her daughter Gail, her Sonny (as she referred to her son-in-law Chris), and her grandchildren Hayden and Rigley.  She was the type of mother that supported her kid in anything her heart dreamed of doing, and the type of grandmother that simply did not believer in the word no.  Penne was a masterpiece of kindness, trust, and courage.  She had the ability to strike up a conversation with anyone and managed to form life-long friendships everywhere she went.  She leaves behind a legacy of kindness and love, and an irreplaceable presence in our lives.

Memorials to be directed by the family.